“It is impossible to find a house that is disability friendly because people do not
construct ramps, slide doors, kitchens and toilets that are disabled friendly.”
The Herald

The problem of inaccessible housing in Zimbabwe

“It is impossible to find a house that is disability friendly because people do not construct ramps, slide doors, kitchens and toilets that are disabled friendly.”
The Herald

The inaccessibility of houses and other residential properties limits the degree to which persons with disabilities can exercise their rights to mobility, education, employment, and health and rehabilitation services, among other rights.

Nineteen years ago, Violet Bhaureni had a stroke during her first child’s pregnancy. The stroke left her paralysed in both legs and she began using crutches to walk.

Using the toilet also became a big problem as she is no longer able to bend her legs to swat.  When the Endless Possibilities team visited her, she told them that she had fallen and injured herself while using the toilet on several occasions and had resorted to using a bucket instead.

In April 2018, Endless Possibilities renovated Violet’s house. The renovations included constructing a concrete walkway, upgrading a pit latrine to a flush toilet as well as installing a new concrete sink and shower system.

After the team finished renovating her house, Violet Baureni, the beneficiary, thanked Endless Possibilities profoundly and said that the new changes will make her life better. She was ecstatic that she would now face less difficulties in walking on her front yard and using the toilet.

Endless Possibilities renovates houses to make them accessible, safe and comfortable for adults with disabilities and their caregivers. While our primary purpose is to enable people with disabilities to move around and take care of themselves in their homes, we also want to make it easy for caregivers to look after individuals with severe impairment. Thus, we remove physical obstacles to an individual’s movement and care in the home.

This project is first being implemented in Dzivarasekwa, a high density area where most people cannot afford to do the renovations on their own.

Video 1: Violet talks about the challenges that she was facing before her house was renovated.

Individuals who made their houses accessible

Edmore Masendeke: Why I built an accessible house in Zimbabwe

This project is inspired by Edmore Masendeke’s personal journey. Eight years ago, Edmore moved from home and started living on his own. This was not easy as he has a physical disability and the house he lived in was not disability-friendly.

Four years later, Edmore stumbled upon a rare opportunity to build a house. So, he customized the design of the house such that it was

disability-friendly, meeting not only his needs but also the needs of other people with types of disabilities. While going through this experience, Edmore started Endless Possibilities and made independent living one of its key focus.

Click the READ MORE button to read the full story.

Enia Marambanyika: 'I renovated my house for me and my daughter'

Before hard times hit her family, she used to be a cross-boarder trader who bought goods in South Africa for resell in Zimbabwe. In addition to looking after herself and her family, Enia used the profit that she realised from her business to renovate her house to make it accessible

for herself and her daughter. The renovations that she did include:

Because she didn’t always have enough money to hire skilled craftsmen, she sometimes did the work herself.

Help us continue renovating houses for people with disabilities

This project is currently being implemented in Dzivarasekwa.

Our goal is to renovate 10 houses a year.

Most of the required renovations are basic low-cost modifications such as installing concrete footpaths and wheelchair ramps, wide doors, easy-turn door handles as well as handrails and grab bars.

We are also going to install toilet seats at most of the houses. These houses currently have swat toilets, which are difficult to use for most of our beneficiaries. 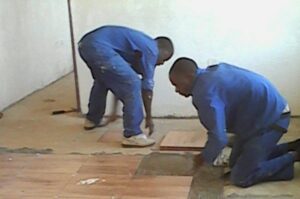 3 Ways You Can Support Us

You may support us in any of the following ways:

1.   Sponsor the renovation of a house or houses

You may sponsor the renovation of one or more houses. Although target beneficiaries have different disabilities and, dherefore, different requirements, the average cost of renovating a house is US$2000.

You contribute towards the renovation of one or more houses by donating building material, equipment or money.

You may also provide us any service which will help us acheve our goal.

Please feel free to contact us if you would like to make a non-financial donation or for more information on the project.

Please subscribe below to receive our latest news and updates via emai.